NFL art from the famous book “The Logical Proof Of God” by Holy Land Man subtitled: “is there a god? any god?” 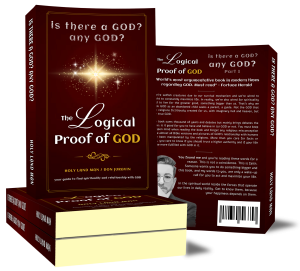 It’s the most argumentative book in history regarding the existence of a god and if we should believe in a god.

IS GOD EVIL OR UNWORTHY OF OUR TRUST?

Right off the bat in Genesis, HOLY LAND MAN noticed that GOD warned Adam and Eve that they would die if they ate of the forbidden fruit. Eve decided to eat the fruit and die. Yet, GOD did not keep his word and decided to make her, and the female generations to come, suffer.

That by itself is evidence of a mean, cruel GOD that is untrustworthy, unlike the GOD that we trust, love, and respect.

GOD has told us many things, through the Torah and the prophets: that he created the world, that he oversees it, that there is no GOD but him, that he has chosen us to be a virtuous people, that he gives reward and punishment, and more. But how does he tell us the truth? How can we know that he is not lying to us or deceiving us? After all, we have no way of verifying his words. What if our whole belief is built on lies?

This question can be extended even further, beyond the credibility of the Bible. Suppose there is a creator for the world, who said he is good?

Maybe he is bad or indifferent? Maybe he created humans to abuse them? How can we know?

Let’s start by saying that many people do not have these questions at all. They existentially and utterly experience the goodness of GOD, and their faith in him is unquestionable.

They do not have a mental answer to these questions, but they do not need such an answer, just as a mentally healthy person is not bothered by thoughts like “Maybe I do not exist.”

The truth is that it is impossible to know, but it is precisely from this that it becomes clear why this question should not bother us.

code2GOD is the sacred art of decoding GOD’s messaging from the original Bible written in his/her/its created Hebrew language. code2GOD holds all answers for life’s key questions, can resolve many domestic and world disputes, bring peace, and uncover hints about the universe. code2GOD is the first-ever scientific proof of the existence of a super-intelligent creator. code2GOD was uncovered by Holy Land Man and it’s based on 32 mathematical scientific codes with endless possibilities. code2GOD reveals that GOD’s Bible holds much more advanced scientific & psychological facts than today’s science can offer.

Holy Land Man believes that Einstein, Newton, and himself were gifted with hints from the divine via dreams and/or hallucinations. The trust in GOD fueled those three to pursue GOD’s hints and turn them into applicable science. code2GOD relies on facts, or the truth, which is of the highest probability of close to 100%. That is, an intelligent designer is responsible for us here and not a random probability.

THE ORIGINAL BIBLE & ITS LANGUAGE

The original Bible has never ever been altered as the Word Of GOD has always been 23,204 sentences, 306,757 words and 1,202,972 letters which were made into 24 books and 929 chapters (the number of books and possibly the chapters did vary). A change in even one letter could void the entire biblical code since all 1,202,972 letters compose a coded message from GOD just like a change in one of GOD’s 6.4 billion DNA gene sequence may create a human defect.

The Torah is the first 5 holiest books, made up of 5,845 verses, 79,980 words and 304,805 letters. GOD created the Hebrew language which is super intelligent and coded with life’s intricate meanings. Even today’s AI software can’t recreate such a coded divine language. A “writer” in GOD’s language is called sofer סופר which is a “calculator” or “counter of numbers.” At first, GOD created the 22 Hebrew letters, then the Torah and then, the universe.

Holy Land Man can guide you can to achieve a high spiritual level by introducing you to the real GOD when you let go of all religious myths and manipulations. Holy Land Man reveals to the world that there is no Satan, no heaven, no hell, no unicorns, no absolute evil, and we’re not sinners. In fact, the world is running just as it should, just as GOD planned it. Once you are part of the code2GOD, life is clearer and the unification with GOD אחד is uplifting to the highest of spirituality.

Other Art By Holy Land Man

Holy Land Man is the first human ever to uncover the code2GOD and create the most expensive art ever valued at $777 million “The Scientific Proof Of GOD” which scientifically proves that there is an intelligent designer of us and the universe.